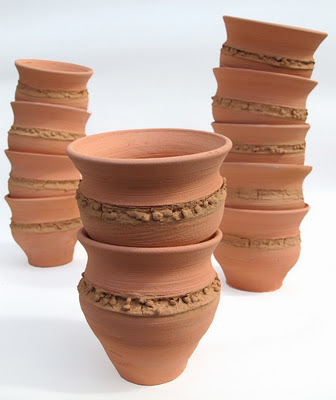 I'm taking part in a group show at Obscura Gallery in East St Kilda.  I have produced a series called Pi Ki Puht - Earth, clay, cup, earth, a series of disposable clay cups which have been embedded with seeds.


Ceramic chai cups have been produced in India using locally sourced red clay for thousands of years. Baked at low temperatures they were an economical way of ensuring there was no contamination between the lower caste chai wallahs and the higher caste chai drinkers. The chai wallah serves his customer the sweet, spicy brew ladled into a small ceramic cup, the flavor mixing with the earthy taste of the terracotta vessel.  Once drunk, the chai cup is tossed away and the satisfying pop sound it makes when being flung from train carriages was once heard all over India. 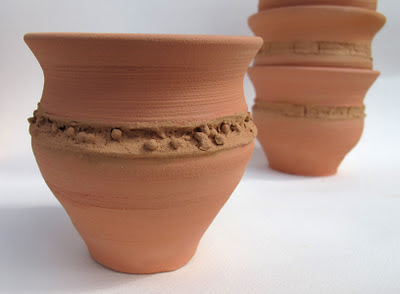 The local name for these cups is pi ke puht- Pi ke meaning to drink and puht being the sound of the cup smashing.
In recent times these traditional cups are being replaced with plastic cups and the cycle of earth, clay, cup, earth has been disrupted leaving mountains of waste across India.
These fast disappearing vessels not only embody an alternative view on consumption culture but are also beautiful and functional objects on their own. Produced en-masse, yet hand made and individual. Throw aways, that have become precious.
Here embedded with seeds (nasturtians, carrot, rocket, parsley) they can’t be kept precious, their potential only fulfilled once discarded. The exhibition opens December 8th 2011 6.30pm-8.30pm and will be on display until the gallery closes 23rd December. It will then reopn in February 2012.
Obscura Gallery, First Floor, 285 Carlisle Street East St Kilda, Melbourne.

Sian Pascale is an artist, architect and designer.
Since founding design studio Young Citizens in 2013 this blog has been on hold.
It is now relaunched with a new purpose- to document the processes and experiments from her work in India and Australia.
Links to her work can be found below.